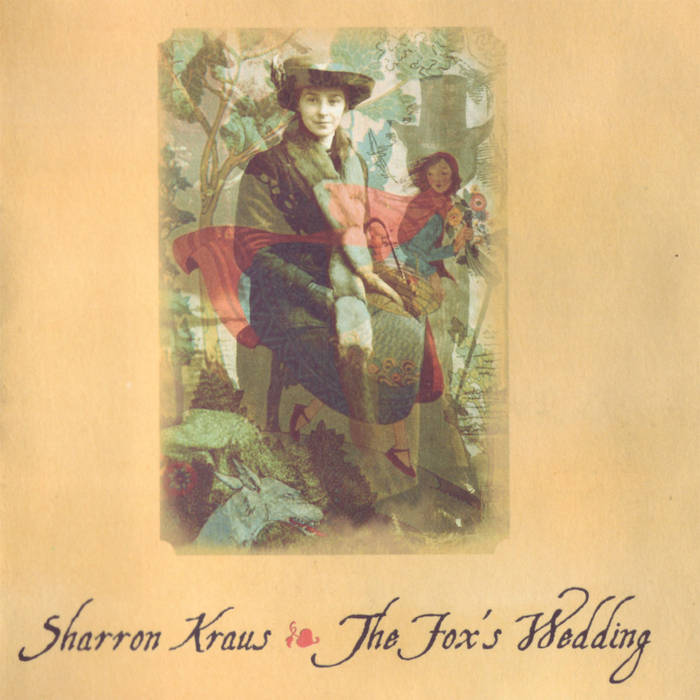 Kahinat It's really hard to pick just one favorite song from this album - I love it as a whole, perfect folk creation from my most beloved artist. Favorite track: In the Middle of Summer.

Oxford-based musician Sharron Kraus has previously been compared to both Anne Briggs and Shirley Collins, but this album is a far darker and more pagan affair than anything by her acknowledged forebears. Taking traditional folk music as her starting point, Kraus adds a sense of innovation that's often startling - she also plays with various avant-noise collectives, something that’s clear here, although not off-puttingly so. The end result is a record that truly updates a fine tradition for modern ears. Recommended.
UNCUT

Oxford based Sharron Kraus is one of the high profile citizens of British underground folk’s invisible republic, writing her own material and singing in a reedy, uninflected voice that recalls Joni Mitchell, Sandy Denny, or Mellow Candle’s Clodagh Simonds. In fact she’s been ploughing this furrow for a while, and by default finds herself the tallest poppy in the much broader free folk field that’s sprung up around her. She’s recently released two startling collaborations - with Gillian Chadwick as Rusalnaia, and with Fursaxa’s Tara Burke as Tau Emerald; and almost inevitably her vision has been endorsed by Durtro’s David Tibet.

Kraus’s fifth solo album is a nature girl’s chapbook of rural epiphanies. Violins, viola da gamba, recorders, piano, accordion, and what sound like oboes, gourdes and celestes swirl around her crisp guitar accompaniments. Michael Tanner’s novel use of E-bowed banjo haloes “The Prophet” with a stinging harmonic effect and contributes to the spellbinding version of Thomas Campion’s incantatory ayre, “Thrice Toss These Oaken Ashes”, a catalogue of Elizabethan love spells. At its best this is spooky  consort music, fecund and mysterious as a Samuel Palmer watercolour.
THE WIRE

Since the release of her 2002 debut album Beautiful Twisted, British singer and musician Sharron Kraus has firmly established herself as a genuine heiress to the UK folk ancestry of Shirley Collins, Lal Waterson, or Maddy Prior. As a solo artist and in collaboration with like-minded peers Fursaxa, Christian Kiefer, or Espers' Meg Baird and Helena Espvall, Kraus has displayed her comprehensive grasp of English and Appalachian folk traditions, performing with a sparkling clear voice that can sound as ancient and elemental as rain, stone, or soil.

Last year, in addition to her myriad other projects, Kraus contributed a track to the massive UK folk compilation John Barleycorn Reborn, and her current work might be best described by what that collection referred to as "Dark Britannica." On her latest solo album The Fox's Wedding, and with the first album from Rusalnaia, her collaborative duo with Ex-Reverie's Gillian Chadwick, Kraus creates folk music that unabashedly evokes the ancient rites, traditions, and mysteries of pre-Christian England. Her music draws heavily upon the influence of such early music pioneers as David Munrow and his Early Music Consort of London, and so will likely put a portion of its audience immediately in mind of hobbits or BBC costume dramas. Throughout these two albums, however, Kraus and her cohorts are also able to keep themselves fixed in the present, leavening their folk traditions with a healthy working knowledge of past and current underground culture.

With its vivid songcraft and rich instrumental textures, The Fox's Wedding is at once Kraus' most ambitious album to date and her most accessible. Tied intrinsically to the natural world and the rhythm of the seasons, the album represents a song cycle of sorts, following a course of doomed romance (naturally), loss and renewal through a full calendar year. Though all of the songs here are originals, they have the heft and feel of traditional material, particularly as Kraus fills her lyrics with allusions to English pagan folklore on "Robin Is Dead", "Green Man", and "Harvest Moon".
Pitchfork

Tired of the forced "lookit me, I'm so weird!" posturing of the acid folk crowd but still have an itch for the traditional folk forms that were revived and updated during the cross-Atlantic folk revival of the '50s and '60s? Then it's time for Sharron Kraus. A native of Oxford, England who spends a fair amount of time in the states collaborating with American musicians like Alec K. Redfearn and Christian Kiefer, Kraus is Shirley and Dolly Collins melded into one, with big pinches of Anne Briggs and Judy Dyble (original lead singer of Fairport Convention) for good measure. A multi-instrumentalist who plays acoustic guitar, hurdy-gurdy and banjo just for starters, Kraus has a warm vocal style steeped in folk tradition but blessedly free of the twee affectations that mar some of its lesser practitioners. (You'll never see Kraus singing harmonies with a hand cupped over her ear.) Unusually for someone so traditional sounding, Kraus writes almost all of her own material rather than scavenging through the Child ballads: only "Thrice Toss These Oaken Ashes" (a setting of a poem by Thomas Campion) isn't an original lyric. Yet these original tunes are so marvelously simple and unadorned that songs like the delicate opener "Brigid" and the marvelously spooky recorder-led "Robin Is Dead" (which could potentially start a new trend: psychedelic Morris dance tunes!) sound authentically trad. Yet another fine album by one of British folk's most underappreciated new practitioners.
All Music Guide

String arrangement on 3 by Jane Griffiths.

All instruments recorded at home by Michael Tanner and Sharron Kraus.