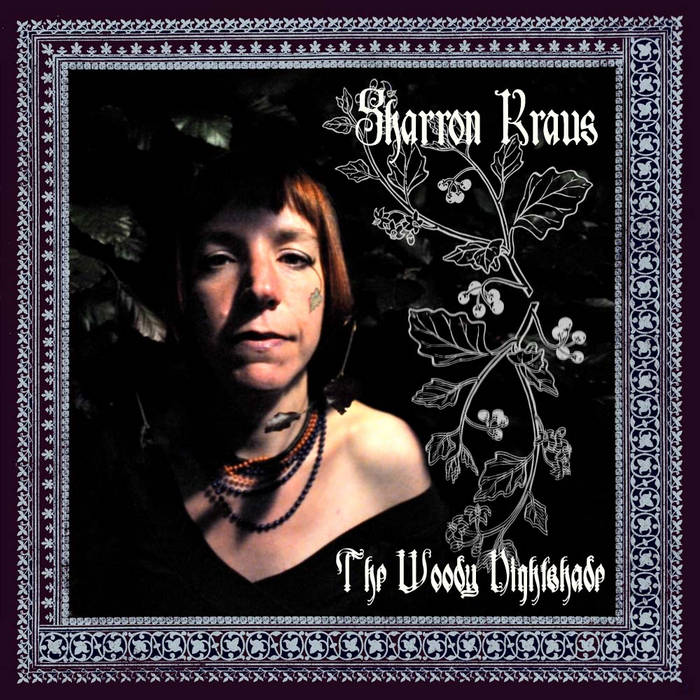 Sharron Kraus is a UK-based singer, musician and songwriter whose craft defiantly recasts yet tenderly cherishes the folk traditions of England and Appalachia. Kraus summons a sound imbued in darkness yet is somehow enveloped in an aura shimmering with heavenly luminescence; her songs tell intricate tales of rootless souls, dark secrets and earthly joys, carried high by an astonishing and inimitable voice of bell-clear sonority. With a tableau of critically-acclaimed albums, collaborations and projects across the past decade, Kraus has forged a musical path bewtiched by the dark side of folk music and its traditions while lifting its veil to the sunlight of modern times. The Woody Nightshade is the newest entry into Kraus' canon, a body of work that is her finest and most ambitious to date - and, notably, the least overtly "folky" of the bunch.

The Woody Nightshade takes an amble down a slightly different route along Sharron Kraus' musical path. Reminiscent of the expanded instrumentation and compositional arrangements found on The Fox's Wedding (released on David Tibet/Current 93's Durtro/Jnana label, 2008), gone are the traditional folk tools of the trade, such as the familiar use of banjo and fiddles, in favor of drums, electric guitar and bass. While that may sound as though Kraus has "gone electric", she uses this foray into broader instrumentation as texture and color, wrapping coarse velvet and splashing subtle earth tones over her songs. Kraus's signature has always been her distinctive vocals, and her idiosyncratic siren sound is in top form throughout The Woody Nightshade. As a first, Kraus is joined alternately by a trio of singers, providing harmony on some tunes and dissonance on others, a turn that furthers the textured qualities and inherent duality in her musical vision. The result is a much more folk-inspired album than folk-saturated, and although a feeling of claustrophobia seems to permeate throughout The Woody Nightshade, shining moments of serenity are present to ease the foreboding tension. Timely and timeless, The Woody Nightshade is a triumph by one of the most original and innovative artists presiding over today's new folk idiom.

Released on CD and LP by Strange Attractors Audio House.

All songs written by Sharron Kraus.