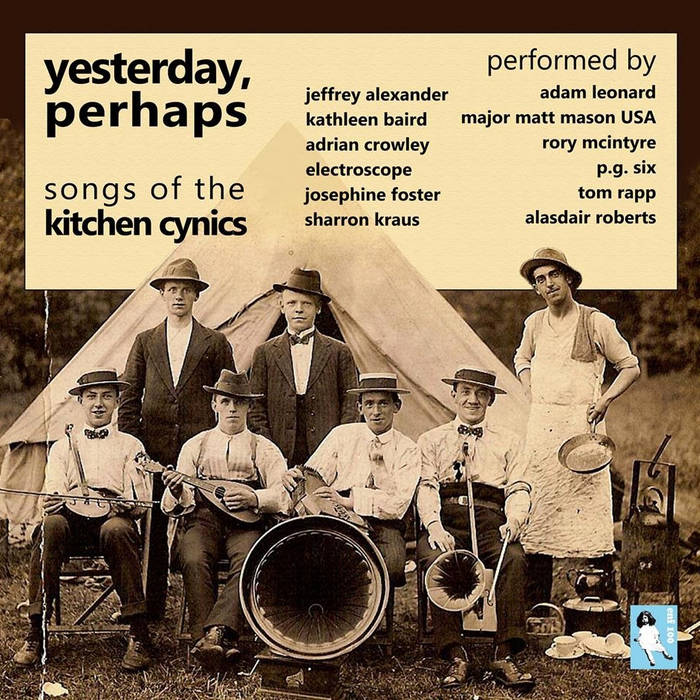 Sleevenotes for ‘Yesterday, Perhaps’:
In a world that is changing with increasing speed, it is up to the individual to find sanctuary and contentment in the small things, the pleasure of a summers day, tea and toast, a favourite toy, or, just maybe, the songs of Alan Davidson, their focus on local history, a sense of place and life’s small pleasures the perfect antidote for the chaos and confusion of modern day living.

For over a quarter of a century, Alan has recorded a wealth of classic tunes under the guise of The Kitchen Cynics, every album containing more than its fair share of gems, his work ethic summed up with 2007′s “Tune-A-Day” project, 365 songs/musical pieces that maintained the quality throughout, each month bringing fresh happiness to those that subscribed to the series.

Now the songs of The Kitchen Cynics are celebrated and shared by some of the finest artists working in the, loosely connected and ever expanding, Folk genre, the quality of the musicians involved a testament to the regard that Alan is held in by his peers.

Voted as gig of the year (2006) by Josephine Foster, in The Wire magazine, Alan has also been described thus “Kitchen Cynics makes me think of a meeting of Anne Briggs and Robert Fripp” by Dylan Carlson (Earth), and this seems to neatly sum up the range of sounds found on Kitchen Cynic records, quiet and loud, humour and regret, living side by side perfectly reconciled by songwriting skills of Mr Davidson, the musical landscape would be a sadder place without him. (Simon Lewis, Ptolemaic Terrascope)